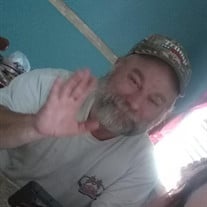 Jeffery Allen Jennings, 58, passed away at MS Baptist Medical Center in Jackson on Monday, September 6, 2021. The family will receive friends for visitation on Saturday, September 11th from 5:00 – 8:00 p.m. and again on Sunday, September 12th from 4:30 – 5:30 p.m. at Chancellor Funeral Home in Florence. The funeral service will begin at 5:30 p.m. in the funeral home Chapel. He will be laid to rest in the Garden of Memories. Jeff was born August 19, 1963 in Simpson County, MS to the late Albert and Judy Jennings. He has lived in Florence for the last 20 years. Jeff proudly served in the U.S. Marine Corp where he reached the rank of Corporal. He graduated with honors from MS Law Enforcement Officers Academy. Following that, he worked as a Sgt. with Pelahatchie Police Department where he was also a firearm instructor. He was a highly decorated agent with MBN, worked at Clan Lab Schools all over the State of MS, and attended the Carlos N. Hathcock Law Enforcement Sniper school Jeff loved his family. He enjoyed being outside hunting, camping, fishing, kayaking, and grilling. He also enjoyed photography. However, his favorite was riding his motorcycle with his wife. Along with his parents, Albert Jennings and Judy Jennings Austin, he is also preceded in death by his sister, Teresa Jennings and his mother-in-law, Kathryn Mullins. He is survived by his wife of 32 years, Susan Jennings of Florence; son, David (Emily) Jennings of Pearl; daughter, Shannon Jennings of Florence; brother, Danny Jennings of Harrisville; sister, Lynn "Andy" Jennings of Florence; and numerous nieces, nephews and other extended family members and friends.
To order memorial trees or send flowers to the family in memory of Mr. Jeff Jennings, please visit our flower store.