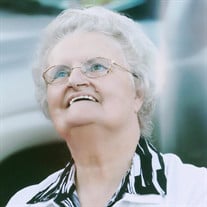 85 years ago, on March 9, 1936, Irma Jean Holland was born to Wiley and Eula Holland. She was the last of ten children and began to play music and minister at an early age. On Tuesday, July 20, 2021, her spirit was transformed from this life to the sunny banks of sweet deliverance. On Sunday, July 25th, a home going service will be held at First Pentecostal Church of Jackson at 6:00pm. Visitation will be from 4:00 – 6:00 prior to the funeral. Her earthly body will be placed in the Jesus Name Tabernacle Cemetery until that Resurrection Morning when her new body will join the spirit and forever be with the Lord. Dr. Jean Holland moved to Richland, Ms. and began her evangelistic ministry at Jesus Name Tabernacle. She had a powerful and anointed music ministry, that inspired many. She began Pastoring in 1979. She became a pillar in the community; loved and respected by everybody that knew her. She was actively involved in the community, always supporting law enforcement and public officials. Affectionately known as “Auntie” to most, Dr. Holland always made everyone feel loved and apart, and that love extended to everyone she met. She spent her “retirement” years with The Golden Girls (Sis. Nancy and the late Sis. Arlene), surrounded by family and friends doing the things she loved most. Dr. Holland still served as Pastor Emeritus of Jesus Name Tabernacle. She is preceded in death by her parents and her nine brothers and sisters. Dr. Holland leaves behind a niece, Doris Kircher, and a nephew, Jerry (Mary) Holland, as well as the family of her nephew, the late Bro. George Guy. She also leaves behind an adopted family, Sis. Nancy Howell, as well as Chauncey (Becky) Fonville, James Howell, Suzette Johnson, and Peggy (Max) Smith and their children. Along with the family, Dr. Holland leaves behind a host of beloved cousins, extended family and friends, and her JNT family, whom she cherished. This is the end of an era, Dr. Holland has finished her fight and won her race, now it is up to us to continue her priceless legacy.
To order memorial trees or send flowers to the family in memory of Dr. Jean Holland, please visit our flower store.