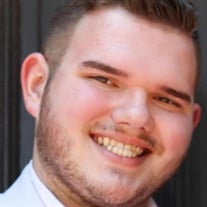 Jay “Bird” Allen Thomas, 21, went to be with the Lord Saturday, September 25, 2021 at the University of Mississippi Medical Center in Jackson. The family will receive friends, Tuesday, September 28, 2021 from 5:00 pm until 7:00 pm at Chancellor Funeral Home in Byram and Wednesday, September 29, 2021 beginning at 10:00 AM until the 11:00 AM Funeral Service at First Ridgeland Baptist Church. Interment will follow in Lakewood Memorial Park. Bird was born December 10, 1999 in Flowood, MS to Nathan and Casey Nelson Thomas. He was a member and actively involved at First Baptist Church in Ridgeland. He was a wonderful husband and the best daddy. His pastimes included playing video games, cooking, hunting, fishing and his most favorite was spending time with his little man, Nate. He attended Germantown High School where he played football and proudly served for 3 years as a member of the JROTC. He loved his brothers and had a great sense of Humor. He could often be heard quoting his favorite saying, “I’m just living the dream”. Jay was selfless, positive, generous and full of faith. He lived with grace and dignity and died the same way. He had a Soldiers heart. Those preceding in death include his father, Nathan Paul Thomas, his grandfather, Jerry Wood and uncle Ben Thomas. Those left to cherish his memory are his wife of 2 ½ years Cheyenne Thomas of Canton; son, Nathan “Nate” Kenneth Thomas of Canton; mother, Casey ( Phillip) Cap of Canton; brothers, Chase Nelson of Canton, Grant Cap of Canton; 1st cousin who was like a brother, Max Sheppard of Summit, MS; maternal grandparents, Joey and Dovie Nelson; Paternal grandparents, Debra Wood, Kenny and Pam Thomas; great grandmother, Carol Janette Nelson; aunts, uncles cousins, in-laws and a host of friends.
To order memorial trees or send flowers to the family in memory of Jay "Bird" Thomas, please visit our flower store.