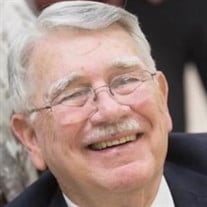 Mr. James (Jim) G. Walker, Sr., 87, passed away on Friday, November 13, 2020 at St. Dominic’s Hospital. Visitation will be Monday, November 16, 2020 at First Baptist Church of Terry beginning at 10 a.m. with the service following at 11 a.m. Please practice social distancing and the wearing of mask. Interment will be in Terry Cemetery. Jim was born in Gainesville, FL on August 4, 1933. He grew up in Panama City, FL. Jim was a veteran of the U.S. Navy. He worked for IBM for 35 years before his retirement. He was a resident of Terry, MS for over 20 years and was a member of the Terry Lions Club and the First Baptist Church of Terry, where he was a former deacon and greeter. He enjoyed Sunday School and Discipleship Training. He was preceded in death by his beloved son, James (Jim) G. Walker, Jr. and his parents, Mr. and Mrs. St. Julian M. Walker. Jim is survived by his wife of 62 years, Joan Hale Walker; and three of their four children: Leigh Ann Armstrong (Billy), Russell Walker (Jean), and Laura Beth Griffing (Jimmie). He was affectionately known as “Grumpy” to his eight grandchildren; four great-grandchildren, and another great-grandchild on the way. Also survived by one brother, William Walker (Ann); a very special cousin, Terry Brant; and numerous other relatives and friends. Online guestbook may be signed at chancellorfuneralhome.com.
To order memorial trees or send flowers to the family in memory of Mr. James G. Walker Sr., please visit our flower store.