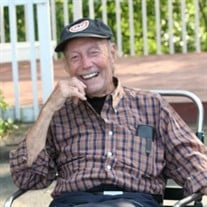 James Welborn Smith passed into the arms of Jesus on Sunday, May 15, 2022, at his home in Florence. He was 93 years old.The family will hold a Memorial Service on Sunday, May 22nd at 3:00 p.m. with visitation beginning at 2:00 p.m. all at Clear Branch Baptist Church in Florence. Mr. Smith was born January 19, 1929, to the late William Rudolph and Ina Thelma Scott Smith in Bishopville, South Carolina. He had lived in Florence since 1968. He was a Graduate of Clemson University with a degree in Civil Engineering. Following graduation, he worked with the Federal Highway Administration, retiring in 1989 where he had many friends that affectionally called him Smitty. He had the ability to extend an appliance’s life by many years. He proudly served his country in the U.S. Army, U.S. Navy, and U.S. Airforce. He enjoyed rebuilding cars, loved hunting and telling stories about hunting, as well as watching Clemson Tiger Football. Along with his parents, he is also preceded in death by 4 brothers, and 1 sister. He is survived by his sons, James “Jim” Smith (Jan) of Pearl and Scott Smith (Sherry) of Florence; daughter, Allison Smith of Florence; 9 grandchildren, 3 great grandchildren and a host of nieces and nephews. Online guestbook may be signed at www.chancellorfuneralhome.com.
To order memorial trees or send flowers to the family in memory of Mr. James "J.W." Smith, please visit our flower store.