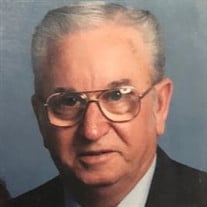 Mr. James Ray Goodin passed away at his home on Saturday, April 21, 2018. His visitation will be held on Monday, April 23, 12:00-2:00 PM at Chancellor Funeral Home in Florence with service at 2:00 PM in the chapel. Mr. Goodin was born and raised in Kemper County, Mississippi on September 13, 1935 to Effie Mae and George Goodin in the Cleveland Community. Graduated at Cleveland School in 1954. James worked hard his entire life helping his parents raising cotton and in the vegetable fields raising food for his family. He was also an avid basketball player. He married the love of his life, Bobbie J. (Gray) Goodin in 1956 and they were blessed with three children. James went to work for the Clarion Ledger in 1957 and retired after 41 years in 1998. James was a devoted father and loving husband to his family giving to them whenever they were in need. His health had declined rapidly over the past few years and he never really got over losing his beloved wife, Bobbie, in 2011. He has now gone to join her in heaven and is no longer heart broken over her. He is survived by his son, Jackie Goodin of Florence; daughter, Brenda (Jim) Evans of Braxton; son, Glenn Goodin of Florence; brothers, Luke and Roger Goodin; sisters, Myrtle Griffith, Lillian Mitchell, and Martha Kay George; grandchildren, Jamey Evans and Ray Goodin; and four great-grandchildren.
To order memorial trees or send flowers to the family in memory of Mr. James Ray Goodin, please visit our flower store.