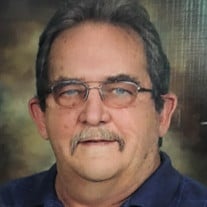 James Elder Carpenter, Jr., 71, passed away at MS Baptist Medical Center on January 8, 2020. Visitation will be Friday, January 10, 2020 at Chancellor Funeral Home in Byram from 12:00 pm until 1:30 pm. A graveside service will follow at Terry cemetery at 2:00 pm. Mr. Carpenter was born to James Elder Carpenter, Sr. and Nancy McDaniel Carpenter on September 28, 1948 in Baton Rouge, LA. He graduated from Central High School in 1966 before attending Hinds Community College. A long-time resident of Mississippi, he was employed in sales and management with several lumber companies. He was an avid LSU fan. He is survived by his mother, Nancy Travelstead; sons, Jamie Carpenter of Crossett, AR and Matthew Carpenter of Clinton; daughter, April Carpenter of New Orleans; brothers, Allen Travelstead of Terry and Joel Travelstead of Jackson; sisters, Linda Ray of Jackson and Ella Duncan of Clinton; nine nephews and three nieces; and seven grand-children.
To order memorial trees or send flowers to the family in memory of Mr. James Elder Carpenter, please visit our flower store.