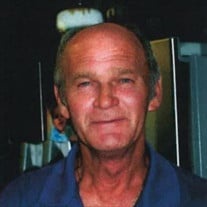 Jackie Dale Brunt, age 64, passed into the arms of Jesus on August 31, 2021, at his home in Richland, Mississippi after a courageous battle with cancer. Graveside services will be on Thursday, September 2 at 10 am at Chancellor Funeral Home (Garden of Memories) in Florence, Mississippi. Born on October 2, 1955, to George and Nannie Brunt of Kosciusko, Mississippi. He was a resident of Richland, Mississippi for 37 years. After marrying the love of his life, Donna Dodd, on July 31, 1982, he was a devoted husband, father and grandfather. He was a member of First Baptist Church in Richland. Jackie retired after 30 years with AT&T. He proudly served his country for over 20 years, where he retired honorably from the MS Army National Guard (155th). He enjoyed his retirement by spending his time with his grandsons and going camping. Along with his parents, Jackie is preceded in death by his sister, Brenda Sue Brunt. He is survived by his wife of 39 years, Donna Brunt; sons Lance (Shelley) and Landon; brothers: Jerry (Jane), George (Faye), and Harvey (Connie) and sister Linda Gibson; grandsons include Gage and Colton Brunt. Jackie also had a host of nieces and nephews. Pallbearers will be Charlie Dodd, Patrick Dodd, Mike Ferrell, Kevin Gibson, Andy Phillips, Noah Sasser and Spencer Sasser. Special thanks to Dr Justin Baker, Lori Brent and staff at Jackson Oncology and Dr Chris Anderson and staff at UMMC transplant. Also, special thanks to Kevin Tucker for his compassion throughout hospice care. In lieu of flowers, donations can be made to American Cancer Society.
To order memorial trees or send flowers to the family in memory of Mr. Jackie Dale Brunt, please visit our flower store.