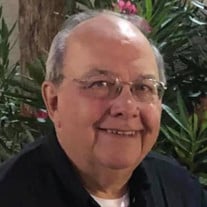 James Odis Smith, Jr., 72, went to be with his Lord on Friday, February 26, 2021 in Ridgeland, MS. Visitation will be Monday, March 01, 2021 at First Pentecostal Church of Jackson from 4:00 p.m. until the hour of the service at 7:00 p.m. A private graveside service will be held at Springridge United Methodist Church Cemetery. Mr. Smith was born to James Odis Smith and Joyce Marie Harkins Smith on September 04, 1948 in Alexandria, LA. A resident of Terry for over 40 years, he was employed as a manager with Miller Transporters Federal Credit Union, now Century First Credit Union. He was a member of First Pentecostal Church of Jackson. Along with his parents, he was preceded in death by his sister, Mary Craft and son, Dericke Smith. He is survived by his wife of 37 years, Pam Smith; daughter, Megan (Chad) Harrison; sons, Jared Smith and Cary (Ilana) Smith; brother, Gary (Barbara) Smith; grandchildren, Garrett Smith, AnaLyse Smith, and Cara Smith; numerous nieces and nephews; and a host of friends.
To order memorial trees or send flowers to the family in memory of Mr. J. O. "James" Smith Jr., please visit our flower store.