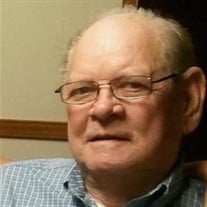 Hugh Leonard Rogers Sr. 83, of Terry, MS passed away on December 04, 2019 at Hospice Ministries in Ridgeland, MS. Visitation will be at Chancellor Funeral Home Friday, December 06, 2019 from 12:00 p.m. until the service at 2:00 p.m. Interment will follow at Lakewood South. Mr. Rogers was born on May 25, 1936 in Raymond, MS to Marlin Rogers and Ruby Taylor Rogers. He worked as a construction supervisor for Delta Construction. Along with his parents, he was preceded in death by his wife, Patsy Rogers; son, Hugh Leonard Rogers, Jr.; and grandson, Justin Rogers Myers. He is survived by daughters, Tangi Webb-Mabry of Terry, MS, Kim (Billy) Myers of Wesson, Ms, and Patti (Butch) Kuhn of Long Beach, MS; brothers, Roy Rodgers and Brother Rodgers; grandchildren, Mystee Dellapenna and Knikki Webb; and six great grandchildren. Memorials may be made to Hospice Ministries in Ridgeland, MS.
To order memorial trees or send flowers to the family in memory of Mr. Hugh Leonard Rogers Sr., please visit our flower store.