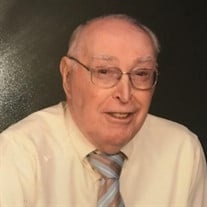 Homer Dekalb Barfield, Jr. passed away on Friday, February 18, 2022 at his home in Terry, MS. He was 96 years old. Visitation will be Sunday, February 20, 2022 from 2:00 p.m. to 3:30 p.m. at Chancellor Funeral Home in Byram, MS, followed by a graveside service at Terry Cemetery at 4:00 p.m. A lifelong resident of Terry, Homer was born in Gallman, MS on November 29, 1925 to Homer Barfield Sr. and Zelma Taylor Barfield. He was a veteran of the US Navy, serving during the Korean War. Homer loved the Lord and was a deacon at First Baptist Church of Terry. He enjoyed yard work, gardening, and his 83 GMC. He loved people and never met a stranger. You always knew where you stood with Mr. Homer. Most of all, Homer loved his family, especially his grandchildren and great-grandchildren. Along with his parents, he was preceded in death by his wife of over 63 years, Mable Virginia Barfield; brother, William “Billy” Barfield; and sisters, Wanzie Barfield Maroon and Donna Mobley. He is survived by son, Ray (Jan) Barfield of Terry; daughter, Fay Fife of Terry; sister, Elizabeth Sandifer of Hammond, LA; grandchildren, Michelle (Ryan) Bridgers and Scotti (Jack) Douglas; and great-grandchildren, Ethan, Aiden, and Nathan Bridgers and Jaylea and Oliva Douglas.
To order memorial trees or send flowers to the family in memory of Mr. Homer Dekalb Barfield Jr., please visit our flower store.