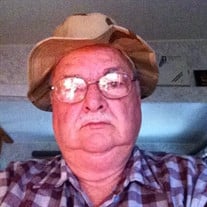 Herbert Andrew "Andy" Wooten, Jr., 81, passed away Saturday, October 12, 2019 at Hillcrest Nursing Home in Magee. Visitation will be at Chancellor Funeral Home in Byram on Thursday, October 17, 2019 from 5-8pm and again on Friday, October 18, 10am until the 11am funeral service. Interment will follow at Lakewood Memorial Park. Mr. Wooten was born in Shreveport, LA to the late Herbert Andrew Wooten, Sr. and Mary Catherine Traylor Wooten. He was a Veteran of the U.S. Air Force, having served his country during the Korean Conflict. He retired from the state of MS Air National Guard and was a Mason at Leavell Woods Lodge #620. Survivors include his children, Drew Wooten of Birmingham, AL, Donnes Brown of Pelahatchie, Dwayne “Red” Wooten of Terry and Dana Morris of Brandon; brother, Jessie Wooten; sister, Margaret Moize and eight grandchildren.
To order memorial trees or send flowers to the family in memory of Mr. Herbert Andrew Wooten Jr., please visit our flower store.