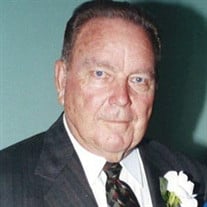 Henry Stephen “H.S.” Clark, 91, went to be with his Lord and Savior on Wednesday, July 24, 2019 at Hospice Ministries in Ridgeland. Visitation will be 9am until the 11am funeral service Friday, July 26, 2019 at Chancellor Funeral Home in Byram, officiated by Rev. Carl Prewitt. Interment will follow at Terry Cemetery. Mr. Clark was born in Preston, MS to the late Robert Edward Clark and Rose Etta Palmer Clark. He was a Veteran of the U.S. Army during the Korean Conflict and a lifelong Mississippi resident. Mr. Clark served as Mayor of Terry for two terms, where he loved serving others, and was President of Jackson Packing Company. He was dedicated to the church, and was a Wahabi Shriner. He is preceded in death by his parents; wife of 67 years, Claudell Taylor Clark; sons, Steve and James Clark; siblings, Jewel Adcock, Buddy Clark and Bobbie Whittington. Survivors include his son, Anthony Clark of Terry; grandchildren, A.J., Taylor, Cameron and Bruno; four great grandchildren.
To order memorial trees or send flowers to the family in memory of Mr. Henry Stephen "H.S." Clark, please visit our flower store.