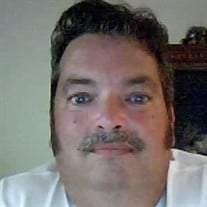 Gregory “Greg” Lyle Workman passed into the arms of Jesus on Wednesday, March 2, 2022 at the V.A. Medical Center in Jackson. He was 61 years old. His family will receive friends for visitation on Sunday, March 6th from 12:00 p.m. until the 2:00 p.m. Chapel Service at Chancellor Funeral Home in Florence. Greg was born December 23, 1960 in Blue Island, IL to the late Lester and Edna Jane Workman. He has lived in the Pearl area for the last 28 years and was a member of First Baptist Church of Florence. He loved to golf, was an avid reader, and enjoyed making model cars, but he really enjoyed watching old black and white movies. He enjoyed Westerns, anything with John Wayne and he was a Star Wars fan. He could also be found spending time with his wife in her garden. They also enjoyed traveling. Along with his parents, Greg was also preceded in death by his brother, James “Jim” Workman, and one nephew. He is survived by his wife of 28 years, Dianne Harrison Workman of Pearl; son, Christopher Allday of Terry; granddaughter, Brooklyn Michelle Allday of Pearl; numerous nieces and nephews; and brother, Lester D. Workman, Jr. “Butch” (Donna) of Loganville, GA.
To order memorial trees or send flowers to the family in memory of Mr. Gregory "Greg" Workman, please visit our flower store.