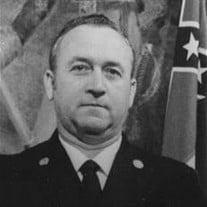 Gordon “Moose” James Merritt, 83, went to be with the Lord on Thursday, June 20, 2019 at Clinton Healthcare. Visitation will be 5-8pm Friday, June 21, 2019 and 12 noon until the 2pm funeral service Saturday, June 22, all at Chancellor Funeral Home in Byram. Interment will follow at Lakewood Memorial Park. Moose was born in Simpson County, MS and graduated from Forest Hill High School in 1954, where he was a great basketball player and went on to play for Hinds Junior College. He retired as Fire Captain after 29 years of loyal service with the Jackson Fire Department and enjoyed hunting, fishing and word puzzles. Moose was a member of First Baptist Church of Byram and former member of Forest Hill UMC. He is preceded in death by his parents, W.T. Merritt and Doris Brook Merritt; step-son, “Billy” Andrew Youngblood, Jr. and his nephew William Harvey Merritt, Jr. Survivors include his loving wife of 43 years, Jane Merritt of Byram; two step-daughters, Donna Strowd of Kodak, TN and Teresa Crowe (Charles) of Terry; brothers, Richard Merritt (Flo) of Jackson and Harvey Merritt (Tinker) of Jackson; sisters, Laura Merritt of Raymond and Virginia Martin of Jackson; four grandchildren and nine great grandchildren; several nieces and nephews and a host of friends. Special thanks to the entire staff of Clinton Healthcare in Clinton and also to Stephen Barbour for the three years he lovingly cared for Moose.
To order memorial trees or send flowers to the family in memory of Mr. Gordon "Moose" James Merritt, please visit our flower store.