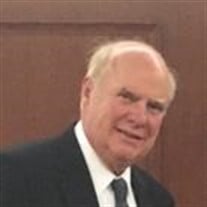 George Elvin Raworth, Jr. 71, went to be with the Lord Saturday, January 18, 2020 at St Dominic Hospital in Jackson. The family will receive friends Wednesday, January 22, 2020, from 5PM – 8PM at Chancellor Funeral Home. The funeral service will be Thursday, January 23, 2020 at 10:00AM at Galloway United Methodist Church Sanctuary. Interment will follow at Legion Memorial Cemetery in Newellton, LA with a 2PM service. George was born April 10, 1948 in Vicksburg MS to George and Opal Mizell Raworth. George spent his early years in St Joseph Louisiana where he graduated from Joseph Moore Davidson High School. He later attended and graduated from Northeast Louisiana University (today known as University of Louisiana – Monroe) with a BS in Business Administration. During the Vietnam era, George served in the U.S. Merchant Marines on vessels transporting munitions to Southeast Asia. . In 1973, he was employed by Mid-State Homes (a subsidiary of Jim Walter Homes) in their collections department and held this position until 1983. He then joined McRae’s and through many acquisitions and mergers remained in the credit division during each transition. In l998, the holdings became known as Saks Incorporated and George was promoted to Credit Director which included oversight of Saks’ private label credit card business. A position he held until his retirement in 2013. Until his death, George was a partner in Raworth and Harvel, LLC., a commercial and residential real estate firm he helped found in the 1970s. A long-time resident of the Jackson area, he was a member of Galloway United Methodist Church, where he was active in Grace Place Ministries and the Heritage Sunday School. George’s hobby was collecting and restoring antique automobiles which he loved to exhibit and drive. He was passionate about maintaining the originality of his collection and encouraged others to do so through the Antique Vehicle Club of Mississippi and the annual State Fair exhibit. George is survived by his wife and best friend, Patsy Hathorn Raworth and his brother, Claude Raworth, both of Terry, MS. He loved as his own, Patsy’s children, Robbin (Donna) Russell of Sydney, Australia, and Judy (Danny) Wallace of Huntington, TN, 5 grandchildren and two great grandchildren Memorials may be made to Grace Place in c/o Galloway United Methodist Church, 305 North Congress St, Jackson, MS 39201,
To order memorial trees or send flowers to the family in memory of George Elvin Raworth Jr., please visit our flower store.