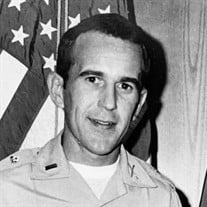 LTC (Ret) George L. Patterson, Jr., 78 passed away Saturday, May 8, 2021 at University of Mississippi Medical Center in Jackson. The family will receive friends for visitation at Chancellor Funeral Home in Florence, MS, on Thursday, May 13, 2021 from 10:00 a.m. to 12:00 p.m. A memorial service will be held in the funeral home chapel immediately following visitation. He will be laid to rest in a private graveside ceremony at Florence cemetery later that day. George was born May 17, 1942 in Lancaster, PA to George L. Patterson, Sr., and Dorothy Ainsworth Patterson. He grew up in Clinton, MS and graduated from Clinton High School where he was voted most handsome his senior year, probably due to his luxurious head of hair. In 1961, as George loved to tell, he saw a girl “from across the room,” and knew it was meant to be. That girl would turn out to be Sammie Dear Thomason who, as he predicted, would become his beloved wife of 59 years, and they would raise 3 children together. George joined the Mississippi Army National Guard in 1960 and would serve with distinction until his retirement in 1995. His military career would include an active-duty assignment at the Pentagon in 1974 and a slot on the MSANG competitive shooting team where he excelled at long-distance marksmanship, earning many awards. George was a man of many talents; he graduated from the University of Southern Mississippi in 1967, worked as a cartographer and draftsman, taught land surveying at Hinds Junior College, and served as an instructor for Officer’s Candidate School. He also enjoyed building furniture, home remodeling and construction, and was a dedicated outdoorsman where he taught his children the importance of conservation-minded wildlife management. George enjoyed spending time with his grandchildren, who knew him as Poppy, and showing them the beauty of being in the outdoors, even if it’s just taking time to watch the squirrels and birds. Along with his parents, George, Sr., and Dorothy, George was preceded in death by his brother Michael Eugene Patterson and sister-in-law Faye Kersh Patterson. George is survived by his wife Sammie of Florence, daughters Debbie (Bert) Williams of Peoria, AZ and Paula Patterson of Halletsville, TX, and son, Bret (Melissa) Patterson of Florence; grandchildren Jordan (Andrew) Meskin, Morgan Williams, Nina Patterson, Carly Patterson, Ridge Walker, and Sophia Walker; great grandchildren, Harper and Hannah Meskin. It should be noted that George and his family fought a long, courageous battle with dementia and their thoughts and prayers are with those individuals and families who are still in the fight. In lieu of flowers, the family asked that charitable donations be made in George’s memory to the Dementia Society of America, the Alzheimer’s Foundation of America, the Disabled American Veterans Charitable Service Trust, or a charity of one’s choice.
To order memorial trees or send flowers to the family in memory of Mr. George L. Patterson Jr., please visit our flower store.