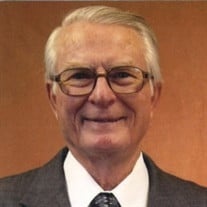 Mr. George Edward Ainsworth, 87, died Tuesday, December 17, 2019 at MS Baptist Medical Center surrounded by his family. His family will receive friends on Wednesday, December 18, 2019, from 5:00 pm to 7:00 pm and again from 12:00 pm to 1:00 pm on Thursday, December 19, 2019 at Chancellor Funeral Home in Florence, MS. A funeral service will be at 1:00 pm on Thursday, December 19th. Interment will follow at Glenwood Cemetery in Richland, MS. In 1952, Mr. Ainsworth married the love of his life, Ann Fortenberry. They were residents of Richland, MS for 60 years where he was a member of First Baptist Church Richland for that entire time and served faithfully as a deacon and Sunday School Teacher. Because of his devoted service to his community as alderman for 25 years and as a volunteer, the Eastside Park in Richland is named in his honor. He was a member of the Lions Club and the Exchange Club. He retired from McKesson Drug Company as warehouse manager after 35 years of service. He also worked in the pharmacy at MS Baptist Medical Center for 7 years. Mr. Ainsworth served proudly in the United States Air Force and was an avid fan of all sports. Mr. Ainsworth is preceded in death by his parents, Estus and Zona Brewer Ainsworth; his brother Ray Ainsworth; his sister Louise Sullivan. He is survived by his wife of 67 years, Ann Fortenberry Ainsworth; 3 daughters, Betty Hall of Richland, Kathy (Ray) Richardson of Richland, and Lisa (Ken) Simpson of Madison; grandchildren, Trey Porch, Brandy Russell, Jerry Richardson, and Ryan Simpson; great grandchildren, Matthew Porch, Hagen Russell, Hannah Porch, and Reagan Russell; a sister in law, Mavis Ainsworth An online guestbook is available at Chancellorfuneralhome.com
To order memorial trees or send flowers to the family in memory of Mr. George Edward "Ed" Ainsworth, please visit our flower store.