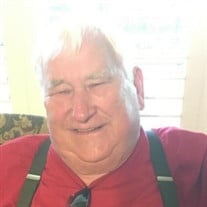 Gary Lee Rice, 80, of Harrisville, MS passed away peacefully in his home on June 8, 2021, surrounded by family and friends. Mr. Rice was born to the late Ernest and Brilla Rice in Harrisville on July 29, 1940. He is survived by his wife of ten years, Ruth; children James (Dana), Rusty (Wendy), Barbie (John), Richard; bonus children, Lisa (Tim), Michelle (Malcolm), Chris, and Chuck, and his long-time companion, Bentley; siblings AnnieMae, Kenneth, Rita, Dorothy, Fred (Deborah), and Linda Sue (Kermit). Gary is also survived by 27(+) grandchildren, and, when we plant ‘Rice’, it grows-so a host of great-grandkids, nephews, nieces, and many other family and friends. Mr. Rice is preceded in death by his late wife Jackie Rice; sons Terry, Jerry, David, Donny, and Eugene Rice; four siblings Gelene, Wilburn, Thomas, and Betty Rice. Mr. Gary Rice joined the Mississippi National Guard at the age of 17 where he spent several years before being honorably discharged. Upon leaving the Guard, Mr. Rice began working at Armstrong World from which he stayed until he retired. He dedicated his life to working hard, his kids, caring for his late wife and their many dogs. After her passing, Mr. Rice met his current wife, Ruth and was married in 2011. Gary and Ruth remained happily married to the day of his passing. He had a love for music, tractors, fishing, dogs, antique cars, NASCAR, the outdoors, and the Lord. Friends and family of Mr. Rice could often find him outside on his tractor, working in his shed, or at Roy’s Grocery drinking coffee. Mr. Gary never met a stranger and was loved by all he came across. He will be dearly missed by everyone. The family will receive friends for visitation on Friday, June 11th from 11:00 a.m. until the 1:00 p.m. funeral service at Harrisville United Methodist Church. He will be laid to rest at Harrisville Cemetery.
To order memorial trees or send flowers to the family in memory of Mr. Gary Lee Rice, please visit our flower store.