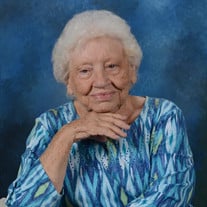 Eleese Addison, 92, died on Tuesday, February 22, 2022, at Lawrence Memorial Hospital in New London, Connecticut. Visitation will be held at Chancellor Funeral Home in Byram, MS on Thursday, March 03, 2022 from 5:00 p.m.--8:00 p.m. and again on Friday, March 04, 2022 from 12:00 p.m. until the hour of the service at 1:00 p.m. Interment will follow at Natchez Trace Memorial Park Cemetery in Madison, Mississippi. Eleese was born in Lexington, Mississippi, on August 11, 1929 and was a long-term resident of Jackson and Terry, Mississippi. She was proceeded in death by her spouse, Hubert (Bob) Addison in 2008 and her seven siblings. She is survived by Donald Ray Addison (Debbie) of Peachtree City, Georgia and David Michael Addison (Katherine) of East Lyme, Connecticut; four grandchildren; two great-grandchildren and many nieces and nephews. Eleese worked for the Jackson Mississippi Police Department for many years as an administrative assistant. She was an avid crafter and shared her work freely with others. Eleese was a member of Lakeshore Methodist Church in Byram, Mississippi. Donations may be made in memoriam to: Lakeshore Church 6880 Siwell Rd Byram, Mississippi
To order memorial trees or send flowers to the family in memory of Mrs. Eleese Addison, please visit our flower store.