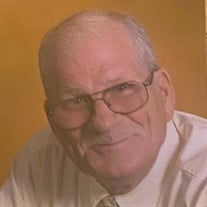 Edward “Eddie” Harvey Langdon passed into the arms of Jesus on Thursday, February 3, 2022 at his home in Florence. He was 85 years old. The family will receive friends for visitation on Sunday, February 6th from 1:00 – 6:00 p.m. at Chancellor Funeral Home in Florence. The Funeral Service will be Monday, February 7th at 11:00 a.m. in the funeral home chapel with visitation one-hour prior to the service. Burial will follow at Floral Hills Memory Gardens in Pearl. Eddie was born February 11, 1936 in Neshoba County, MS to the late Herman and Claudia Jolly. He has lived in Florence the past 45 years and was a member of Star Baptist Church. He served his country proudly in the U.S. Army. He worked for 20 years with the Storkline, followed by Durfold as Supervisor Metal Fabrication, then 4 years with the State of Mississippi. Eddie is preceded in death by his mother and father, Herman and Claudia Jolly; his son, Jimmy Langdon, grandson, Chad Ingle; and three brothers, Raymond, John and Mark. He is survived by his wife of 62 years, Kathy Langdon of Florence; sons, Gene Langdon of Meridian and Robert (Shelly) Langdon of Florence; daughter, Liz (Kenneth) Dunham of Newnan, GA; 20 grandchildren and 17 great grandchildren. Online guestbook may be signed at www.chancellorfuneralhome.com.
To order memorial trees or send flowers to the family in memory of Mr. Edward Harvey Langdon, please visit our flower store.