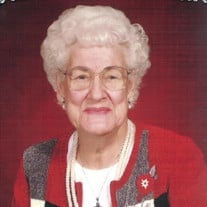 Edna Ruth Rogers Cranford, born on April 09, 1928 in Canton, MS, passed away on Tuesday, May 17, 2022 in Ridgeland, MS. Visitation will be held at Chancellor Funeral Home in Byram, MS on Friday, May 20, 2022 from 12:00 p.m. until the hour of the service at 1:00 p.m. Interment will follow at Lakewood Memorial Park in Jackson, MS. Edna spent her life in Jackson, MS. She was married to John William “Bill” Cranford for 56 years. They enjoyed traveling and camping. In her later years, she enjoyed crocheting and various other crafts. Edna spent many hours caring for her plants and flowers with the “green thumb” God blessed her with. As her witness to God, she spent countless hours crocheting Bible bookmarks to give to many. Edna worked in retail for most of her life and enjoyed many years feeding the children in the Jackson City Schools. Edna and Bill were Charter Members of McDowell Road Baptist Church and served there until it closed. She was also a member of Raymond Road Baptist Church and enjoyed the Esther Sunday School Class until her health started failing. Edna spoke often of the children she taught in Bible School at McDowell Road Baptist Church and kept in touch with many. She was preceded in death by her husband, John W. Cranford, three brothers, and one sister. She is survived by two special nieces, Phyliss Brown of Baton Rouge, LA and Jerry Kaye Parker of Hattiesburg, MS, as well as numerous other nieces and nephews. The family would like to extend special thanks to her close friend and neighbor, Patsy French and neighbors, Shirley and Steve Barber and Christy Gaddis.
To order memorial trees or send flowers to the family in memory of Mrs. Edna Ruth Cranford, please visit our flower store.