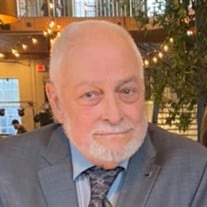 Dwight Nordin Trim, 75, passed away Tuesday, February 15, 2022. The family will receive friends for visitation on Friday, February 18th from 12:00 – 1:30 p.m. at Chancellor Funeral Home in Florence. A Graveside Service will follow at 2:00 p.m. at Mountain Creek Cemetery in Florence. Dwight was born July 29, 1946 in New Orleans, LA to the late Earl and Evelyn Trim. He served his country in the United States Air Force where he worked on aircrafts. After many employment adventures, Dwight found his home with the Jackson Fire Department. After 20 years of service fighting fires, dispatching and training new firefighters, he retired as a captain. When he wasn’t working with the fire department, you could find him working for the City of Jackson ambulance service. Dwight enjoyed fishing, racing and tinkering in his shop. Following retirement, he could be found on the stands of any Brookhaven Academy game, cheering on his grandchildren. He was never without a smile, a story, or a joke to share. Those who knew him best, called him “Partner”. Dwight was a member of First Baptist Church of Brookhaven. He gave credit to Bro. Greg Warnock and Dr. Bill Sones for spurring on his love of God’s word. Dwight is survived by his wife of 51 years, Kathryn Compere Trim of Brookhaven; daughter, Tracy (Trey) Freeny of Brookhaven; son, Steve (Tammy) Henson of Oklahoma; brothers, George (Darisa) Trim and Ed (Dana) Trim; and sister, Debbie Broadway. He was loved by his grandchildren, Taylor (Katie), Hayley, Natalie Freeny, Savannah (Christian) Howard, and Braxton Henson. He will be missed by many nieces and nephews also. In lieu of flowers, memorial donations may be made to First Baptist Church of Brookhaven (601) 833-5118 or Mountain Creek Baptist Church, P.O. Box 94 Florence, MS 39073. Online guestbook may be signed at www.chancellorfuneralhome.com.
To order memorial trees or send flowers to the family in memory of Mr. Dwight Nordin Trim, please visit our flower store.