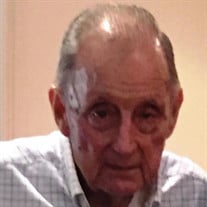 Doyle Drennon Dykes passed away on April 15, 2020 to his heavenly home. He was 83 years old. During the last year of his life, he fought many battles with his health, but never once did he complain. He kept a smile on his face and joy in his heart and was kind to all no mater his circumstances. The family will have a private graveside service at 2:00 p.m. Saturday, April 18 at Lakewood Memorial Park South with a memorial service at a later date. Mr. Dykes was born to Moland Dykes and Lynnie Wilkes Dykes on October 08, 1936 in McComb, MS. Doyle was a resident of Florence and a long-time member of the First Pentecostal Church where he served as a former Sunday-school teacher. Though he enjoyed all sports, he was an avid Ole Miss fan most of all. Doyle never met a stranger. He loved to make others laugh and telling stories about the good old days. He was immensely proud of his children and grandchildren and all of their accomplishments. His grandchildren and great-grandchildren will forever remember their Papaw’s jokes and stories. Along with his parents, he is preceded in death by three brothers, Moland Dykes, Jr., Larry Dykes, and Randy Dykes. He survived by his loving wife of fifty-six years, Ruby Dykes; his son, Joseph (Karen) Branton of Knoxville, TN; two daughters, Susan (Paul) Nordstrom of Austin, TX and Dawn (Mike) Meadows of Brandon; brother, Lynn (Margaret) Dykes of Pearl; sister, Joan Crawford of Houston, TX; three grandchildren, Matthew (Johanna) Followill, Madison Pinn, and Ty Meadows; two great-grandchildren, Knox and Adrian; and his faithful companion of twelve years, his dog, Rex.
To order memorial trees or send flowers to the family in memory of Mr. Doyle Drennon Dykes, please visit our flower store.