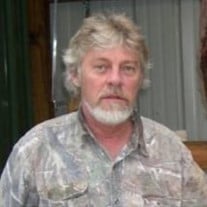 Donald Ben Levins, Sr. passed away on Tuesday, March 08, 2022 at his home in Florence, MS. He was 64 years old. Visitation will be held at Chancellor Funeral Home in Byram, MS on Monday, March 14, 2022 from 12:00 p.m. until the hour of the service at 2:00 p.m. Interment will follow at Lakewood Memorial Park in Jackson, MS. A livestream of the service will be available on the Chancellor Funeral Home Facebook page. Don was born in Jackson, MS on May 30, 1957. He retired from Buford Plumbing after more than 40 years of employment. In his spare time, he enjoyed hunting, fishing, and watching Nascar races. He was a big fan of the New Orleans Saints. Don was preceded in death by his father, James Ben Levins; wife, Sarita Alexander Levins; and wife, Tammy Hill Levins. He is survived by his mother, Nancy Levins of Terry; son, Donald Levins, Jr. of Terry; daughter, Summer Levins DeSimone (Scott) of Loveland, CO; sister, Lynn Levins Robinson (James) of Raymond; and two grandsons, Curtis and Noah.
To order memorial trees or send flowers to the family in memory of Mr. Donald Ben Levins Sr., please visit our flower store.