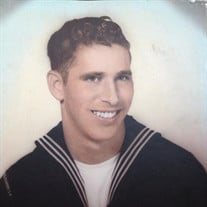 David Benjamin Pullen passed away Tuesday, March 29, 2022 at his home in Florence, MS. He was 76 years old. The family will receive friends for visitation on Friday, April 1st from 5:00 – 7:00 p.m. and again Saturday, April 2nd from 12:00 p.m. until the 1:00 p.m. funeral service, all at Chancellor Funeral Home in Florence. Afterwards, he will be laid to rest following the service in the Garden of Memories next to the funeral home. David was born October 8, 1945 to the late Roland and Rilla Pullen in Poplarville, MS where he was raised. He enlisted in the U.S. Navy and served proudly for 4 years. He loved God and his family. He was a wonderful Daddy, Papaw, Brother, Uncle, and Friend. Most of all, he was a devoted daddy to his daughter, Ronda. Additionally, he helped raise his stepson, Willie, stepdaughter, Joy, and remained best friends with the mother of their children, Linda. David retired from General Motors after 32 years. He loved fishing, hunting, and camping with his family; following his retirement, became a full-time fisherman as a member of the Cane Creek Outdoor Club. He loved music, singing, and playing the harmonica. David was known for helping people and not expecting anything in return. Along with his parents, David was preceded in death by his brothers, Jerry Byrd and H.E. Byrd; his sister-in-law, Pat Pullen; and several nieces and nephews. He is survived by his daughters, Ronda Head (Michael) of St. Johns, FL and Joy Metz (Tim) of Utica, MS; son, William McKeithen of Brandon, MS; brother, Nate Pullen of Lumberton, MS; sisters, Linda (Robert) Owen of Lumberton, MS and Betty (Jerry) Brewer of Bay St. Louis, MS; grandchildren, Jonathan Head, David Head, Andrew Head, Benjamin McKeithen (Chelsea), Scott McKeithen (Cheryl), and Billy Andrews (Landy); great grandchildren, Skyler, Kaitlyn, Colton, Chase, Kylie and Brayden McKeithen; and numerous nieces and nephews. Online guestbook may be signed at www.chancellorfuneralhome.com.
To order memorial trees or send flowers to the family in memory of Mr. David Benjamin Pullen, please visit our flower store.