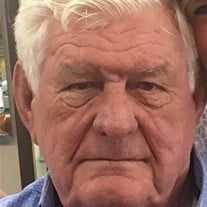 Danny Lewis Ford, 79, passed away Wednesday, October 9, 2019 at Edgewood Nursing Home. Visitation will be at Chancellor Funeral Home on Wednesday, October 16, 2019 from 1:00pm until the 3:00pm memorial service to celebrate his life. Mr. Ford was a lifelong resident of Byram where he was a member of Byram Baptist Church. He was a former Alderman of the city of Byram in Ward 6 and was instrumental in the incorporation of Byram. Mr. Ford owned and operated JaxTrax Speedway and was President of Old Byram Hunting & Fishing Club, where he had been a member since 1978. He was a Mason of the James A. Myers Masonic Lodge and a 32 degree Shriner of the Wahabi Shrine Temple, where he rode in the motor corp. Mr. Ford was owner/operator of Fordco Electric for 32 years and former employee of Bell South. He was a wonderful, loving husband, father, grandfather, brother and friend to many. He is preceded in death by his parents Thomas S. Ford and Sarah T. Lewis Ford. Survivors include his loving wife of seven years, Donna Ford of Utica; son, Jim Ford of Florence; daughter, Dannette Ford and husband David Snyder of Crystal Springs; three step-daughters; brother, Tommy Ford (Charlene) of Byram; grandchildren, Samantha Davis (Joe) and Amy Lowery; great grandchildren, Madison, Haley, Owen, Rylynn, Colton and Grayson. Memorials may be made to Shriner’s Hospitals for Children. Online guest book available at www.chancellorfuneralhome.com.
To order memorial trees or send flowers to the family in memory of Mr. Danny Lewis Ford, please visit our flower store.