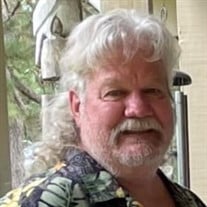 Dallas Ray Linton, 65, passed away on Monday, June 21, 2021 at his home in Terry, MS. Visitation will be Thursday, July 01, 2021 from 10:00 a.m. until the hour of the service at 11:00 a.m. at Chancellor Funeral Home in Byram, MS. Interment will follow at Terry Cemetery. Mr. Linton was born on March 17, 1956 to William Linton, Jr. and Sarah Gilbert Linton in Houston, TX. Starting out as a plumber, Dallas began his career as a handyman while still attending Pearl High School. He graduated in 1974 and went on to serve in the US Army. He was previously employed in maintenance with the Brookhaven School System and later as a truck driver with FedEx, but being a handyman was what he truly enjoyed. Dallas loved everyone and never met a stranger. He was the life of the party and his laugh was contagious. He is preceded in death by his son, Solomon Eli Linton. He is survived by son, Dallas “D” Linton, Jr. (Alicia) of Terry; sisters, Barbara Calcote (Eddie) of Brookhaven, Patricia King (Johnny) of Wesson and Vickie Craft of Forest; and five grandchildren, Maddox Eli Linton, Dallas Bradyn Linton, Khloe King, Jaylynn Thompson, and Maddie Thompson.
To order memorial trees or send flowers to the family in memory of Mr. Dallas Ray Linton Sr., please visit our flower store.