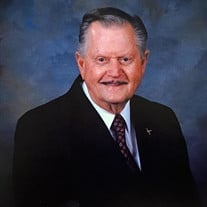 Dr. Lewis Dale Holloway, Sr., 88, crossed to his forever home on November 16, 2020. Dale, the second youngest of 10 children, was born in Carriere, MS, February 18, 1932 to John Milner and Lula Holloway. He met Patricia Lucas at Clarke College, and they were married on May 30, 1953 in Louise Baptist Church, which he was called to pastor in 1954. He and Pat and their two sons, Lewis and Mike, moved to Kansas in 1956 to start new churches and work in education. Missing home, they moved back to Mississippi and a generation later, expanded the family with two daughters, Kim and Jenna. After Pat passed away, Dale found love again, enjoying 10 years married to Ann Hall. Dale served in the 138th Army Unit in the Korean War. He graduated from Mississippi College and earned his doctorate in Education from Ole Miss. His career in education spanned from 8th grade teacher in Kansas, to school counselor in Florence, to head of elementary accreditation for the state of Mississippi. He balanced those duties as he planted churches, including Cleary Baptist and Daystar Baptist in Florence. Always a “double-duty” preacher, he inspired countless others in his role as missionary to Baptist bivocational pastors across the United States. He enjoyed preaching of all kinds, preferring funerals over weddings “because they’re more permanent.” But his call to ministry went far beyond the pulpit. He spent his life serving others in large ways and small, yet was always surprised to learn how his generous spirit and boundless good humor had impacted so many people. Dale sang as loud as he snored. He could tell stories for hours (some of them were even true) and peppered sermons and speeches with plenty of jokes. He loved fishing in lakes and floating down the Pearl River, watching Andy Griffith and listening to Anne Murray, playing Rummikub and shooting the moon in hearts, and sitting outside in the gloaming hours catching sight of birds, squirrels, and deer. He couldn’t abide telemarketers, being overcharged, vegetables (though watermelon was his favorite), people who turned around in his driveway, and worst of all being woken from his afternoon nap. He enjoyed many great friendships in his life—from his childhood pal Hezzie Lumpkin, to his Kansas fellow funny man Dick Mott, to his lifelong best friend Benton Preston. He adored most of his dogs, from his first, Wink, to his last, Happy (who was his favorite child because he never wrecked the car or asked for money). But he loved God and his family above all. He built a bridge in Korea, made a pilgrimage to the Holy Land, explored Europe, and gave speeches in cities across the U.S. but was always happiest sleeping in Florence, Mississippi. He entered this world at home and left the same way. After struggling with dementia and heart trouble, he is now strolling in heavenly sunlight free from suffering. We can only imagine his incredible joy today. He is survived by his wife, Ann Holloway, his son Dr. Lewis Holloway, Jr., his daughters Kim Holloway and Jenna Cochran, his daughters-in-law Karen Holloway and Kay Holloway and his son-in-law Shawn Cochran. He was a proud Paw Paw to Tray Holloway, Lucas Holloway, Joshua Holloway, Ben Holloway, Kristin Holloway, Jackson Cochran, and Eli Cochran. His three surviving sisters are Ina Rose Bullock, Betty Lou Barber, and Shirley Hopes. He was preceded in death by his wife Patricia Holloway, his son Mike Holloway, and his brothers Pearson, Keith, Carl, Arthur, and Ray and his sister Daphne Card. Visitation will be held at First Baptist Church of Florence on Friday, November 20th from 10:00 am until 12:00 pm with a funeral service at 12:00 pm officiated by Rev. Tim Dear. Memorials may be made to the Bivocational and Small Church Leadership Network at bscln.net. Online guestbook may be signed at www.chancellorfuneralhome.com.
To order memorial trees or send flowers to the family in memory of Dr. Dale Holloway Sr., please visit our flower store.