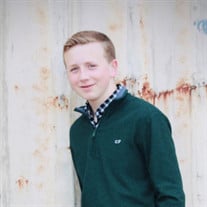 Coleman “Cole” Scott Bridges, 14 passed into the arms of Jesus on Tuesday, February 25, 2020 at University of Mississippi Medical Center in Jackson. The family will receive friends for visitation on Friday, February 28th from 5:00 -8:00 p.m. and again on Saturday, February 29th from 10:00 a.m. until the 12:00 p.m. Funeral Service all at First Baptist Church of Florence. Burial will follow in the Florence City Cemetery in Florence. Cole was born November 3, 2005 in Jackson, MS to Scotty and Brandy Bridges. He was their first child and the first grandchild in the family. There are many words to describe Cole. He was kind, diligent, funny, smart, compassionate, and a role model to many. He was so very talented, genuine, had a huge heart, loved his family, his community, his church, his school, but most of all he loved the Lord and made that known in the way he lived his life each and every day. He truly lived life to the fullest. In his short life, he traveled all over with his family. From Orlando, FL to New York, NY and many places in between. He would go to Starkville on the weekends with his parents and sister to watch the Bulldogs play anything. He was the best big brother and son anyone could ask for. He was a faithful member of First Baptist Church of Florence where he was very active in his youth group and the played the piano in the youth 180 praise band. He was an eighth grader at Florence Middle School where he excelled academically, often earning the title of Student of the Month. He was a member of the National BETA Club, where he won Champion in the Junior Creative Writing at the National Convention last year. He was an avid reader and even a published author. Cole love music and he played the piano since he was in the first grade. He played the piano beautifully and enjoyed playing tennis. Cole was loved by everybody that knew him. His sweet smile was sincere and contagious. Cole is survived by his loving parents, Scotty and Brandy Bridges of Florence; his adoring sister, Brooke; his proud grandparents, Dale and Linda Bridges of Florence, Mack Boyd, Jr., Ricky and Donna Neely of Florence; Great grandmother, Ira Sue Fortenberry; uncle, Justin (Melissa) Bridges; cousins, Jack and Bella; other extended family and numerous teachers and leaders, and a multitude of friends. In lieu of flowers, the family request memorials be made to First Baptist Church of Florence in Cole's honor.
To order memorial trees or send flowers to the family in memory of Cole Scott Bridges, please visit our flower store.