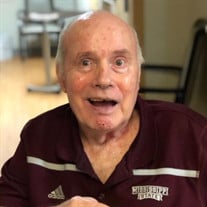 Charles Louis Nikolic, 76, passed into the arms of Jesus on Thursday, July 23, 2020 at Edgewood Health & Rehabilitation in Byram, MS. Visitation will be from 9:00 a.m.—10:30 a.m. on Wednesday, July 29 at Chancellor Funeral Home in Byram with a graveside service to follow at 11:00 a.m. at Lakewood Memorial Park South. Due to the current circumstances regarding COVID-19, the funeral home will have an occupancy of ten people in the building at a time. All attendees are required to wear a face covering and practice social distancing. Charles was born to John C. Nikolic and Lessie Pearl May Clinton on October 16, 1943 in Gulfport, MS. A graduate of Mississippi College and New Orleans Baptist Theological Seminary, Mr. Nikolic pastored and served as recreational director at many churches throughout Mississippi. He was employed at Metro Baptist until a car accident prevented him from continuing to work. Charles loved serving his church family, especially working with youth through sports programs and building churches. In his spare time, he enjoyed water rafting, spending time with his grandchildren, and supporting his favorite sports teams—Mississippi State, the New York Yankees, and the Mississippi Braves. Along with his parents, he was preceded in death by his wife of 56 years, Nora Nikolic; brothers, Troy Clinton and Roy Clinton; and sister, Martha Petras. He is survived by his daughters, Latricia (Terry) McNair of Terry and Tere (Shane) Crouchet of Harahan, LA; brother, John Nikolic of Pearl; sister, Joyce (Steve) Evans of Florence; five grandchildren, Aaron (Allie) Parker, Hannah Parker, Brian McNair, Abbigail Crouchet, and Corbin Crouchet; and four great-grandchildren, Leyton and Silas Parker, Gracelyn Cozart, and Dakota Cook. Memorials may be made to the Boys and Girls Club of Central Mississippi or the Brain Injury Association of America. The family would like to give special thanks to Edgewood of Byram and PAX Hospice for their loving care. Online guestbook may be signed at chancellorfuneralhome.com.
To order memorial trees or send flowers to the family in memory of Mr. Charles Louis Nikolic, please visit our flower store.