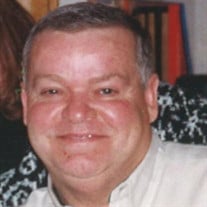 Charles C. Bullock, 72, died January 16 after a lengthy illness concluding with complications from COVID-19. Arrangements are coordinated with Chancellor Funeral Home in Byram. A graveside service with military honors will be held at 11:00 AM Wednesday, January 20, 2021, at Lakewood South Memorial Park with family and friends in accordance with the pandemic conditions. Officiating will be Rev. Jon Daniels Charles will long be remembered for the high value he placed on his love for his family and friends, along with his many years of public service in law enforcement. Charles was born in Jackson on October 11, 1948, and was the son of the late Mayfield and Nell Bullock of South Jackson and Clinton. He graduated from Central High School in 1968. He served in the US Marine Corp full-time from 1968 to 1972 with duties on the USS Forrestal aircraft carrier as his captain's orderly, followed by duties at Guantanamo Bay in Cuba, and ending with his reserve status in 1975. His law enforcement experience began in 1972 for 20 years with the Clinton Police Department, retiring as lieutenant in 1992. He was named the Law Enforcement Officer of the Year in 1982. He followed his service to Clinton with 20 years additional law enforcement with the Hinds County Sheriff's Office, completing his work there as Director of Training, and retiring in 2012 as a captain. Later he had a brief stint (2014-2017) as a sergeant with the State Capitol Police. Charles' devotion to community service included in his early years being Vice President and President of the Clinton Jaycees and in 1980 he was named as Jaycee's Chairman of the Year. Charles is predeceased by his parents, his brother Maxwell, and sister Sandra McFarland. He is survived by his daughter Andrea, and is also survived by Lois Farmer Bullock, the mother of his daughter (Gluckstadt); three brothers Stanley (Byram), Jerry (Clinton), and William C. Wood (Clinton); two sisters Janet Lynn (Madison), and Mary Jean Christian (John) of Tallulah, LA; along with a number of nieces, nephews, and cousins. In lieu of flowers, the family requests memorials to be made to the local missions programs of Country Woods Baptist Church, 6737 Siwell Road, Byram, MS 39272
To order memorial trees or send flowers to the family in memory of Mr. Charles Ceph Bullock, please visit our flower store.