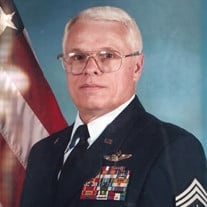 CMSgt Cecil Ernie Watson USAF Retired, passed away on Wednesday, December 29, 2021 at his home in Terry, MS. He was 76 years old. Visitation was held at Chancellor Funeral Home in Byram, MS on Monday, January 03, 2021 from 5:00 p.m.—8:00 p.m. and again on Tuesday, January 04, 2021 from 12:00 p.m. until the hour of the service at 1:00 p.m. Interment followed at Terry Cemetery in Terry, MS. Ernie was born in Alexandria, VA on September 05, 1945 to Fred Watson, Jr. and Gladys Holsinger Watson. He was a proud veteran of the United States Air Force and Air National Guard. He served during Desert Storm and the Vietnam War, reaching the rank of Command Chief Master Sergeant after 42 years of service. Mr. Watson was a workaholic—he couldn’t help getting another job every time he tried to retire. He was a member of the First Baptist Church of Byram. Most of all, Ernie loved his family. He always told his son, Joey, that he could have his own Powder Puff team because the only children he could have were girls, but he was very proud of his grandchildren and great-grandchildren. He was preceded in death by his wife of 56 years, JoAnn Hynum Watson and daughter, Jenny Emerson. He is survived by his sons, Joey (Melisa) Watson and Chris Watson; daughter, Jessica (Adam) Holmes; seven grandchildren; and six great-grandchildren. In lieu of flowers, donations may be made to the Wounded Warrior Project at https://support.woundedwarriorproject.org/
To order memorial trees or send flowers to the family in memory of CMSgt Cecil Ernie Watson, please visit our flower store.