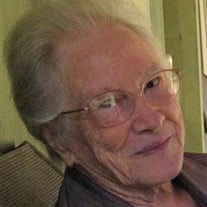 Mrs. Catherine Spencer Cook, known as “Granny” and “Aunt Telo” throughout her family, passed away on Wednesday, April 13, 2022 in Jackson, MS. She was 94 years old. Visitation was held at Chancellor Funeral Home in Byram, MS on Friday, April 15, 2022 from 9:00 a.m. until the hour of the service at 11:00 a.m. Interment followed at Lakewood Memorial Park in Jackson, MS. A long-time resident of Terry, MS, Catherine was born in Drew, MS on March 14, 1928. She was a member of Springridge United Methodist Church where she sang in the choir for many years. Catherine was preceded in death by her husband, Earl Cook; parents, Greene and Adelle Spencer; son, Rusty Cook; son-in-law, Rick Olson; great-granddaughter, Caroline Bryant; sisters, Venita Sparks, Jeanette Hutchins, and Mildred Alderson; and brother-in-law, Rayford Hutchins. She is survived by four sons, Billy (Marilyn) Cook of Richland, Don (Deborah) Cook of Terry, Randy (Pam) Cook of Brandon, and Ricky (Betty) Cook of Utica; daughter, Kathy Olson of Bahama, NC; brother, Grady (Davida) Spencer of Silver Creek; brothers-in-law, James (Helen) Sparks of Cullman, AL and Gafford Alderson of Terry, MS; 20 grandchildren; 18 great-grandchildren; one grandchild on the way and one great-great-grandchild on the way. In lieu of flowers, donations may be made to Blair E. Batson Children’s of Mississippi at https://umc.edu/Office_of_Development/Give_Now.html or Springridge UMC at 1083 Davis Rd., Terry, MS 39170.
To order memorial trees or send flowers to the family in memory of Mrs. Catherine Cook, please visit our flower store.