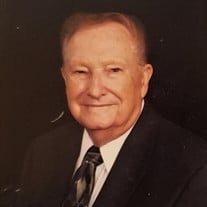 Carl Kenneth Spencer, 86, passed away on Thursday, August 20, 2020 at St. Dominic’s in Jackson, MS. A memorial service will be held at 3:00 p.m. on Sunday, August 23, 2020 at Siwell Rd. Church of Christ in Byram, MS. Mr. Spencer was born to John Alma Spencer and Ruby Gilbert on January 25, 1935 in Delta City, MS. After living in Indianola, MS for 34 years, he had resided in Byram since 2002 and was a member of the Siwell Rd. Church of Christ. He was employed with the MS State Health Department as a health inspector for 42 years. Carl was an avid camper and fisherman. In his spare time, he also enjoyed outdoor sports, especially basketball. He loved food, both cooking it and eating it. He was preceded in death by his mother, Ruby Gilbert Presnall; son, Carl Daniel Spencer; and granddaughter, Heather Spencer. He is survived by his loving wife of 63 years, Vera Spencer; son, Dale Spencer; grandchildren, Ashlyn, Macey, Meagan, and Xan (Jeen) Spencer; and great-grandchildren, Cullen and Maryn Spencer.
To order memorial trees or send flowers to the family in memory of Mr. Carl Kenneth Spencer, please visit our flower store.