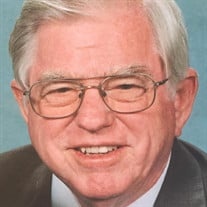 Calvin Isaac Patrick, Jr, 88, of Hoover, Alabama, peacefully passed away on Thursday, March 18, 2021. We rejoice that he was received into the loving embrace of his Lord and Savior Jesus Christ and ushered into Heaven where there is no more night and no more pain. Calvin was born in Moorehead, Mississippi on April 27, 1932 to the late Calvin Isaac Patrick, Sr. and Rosalia Tate Patrick, who were share-croppers. He is preceded in death by his son, John Calvin Patrick, his brother, Thomas Nathaniel Patrick and his sisters, Martha Celeste Patrick Ramirez and Naomi Patrick Kemp. Calvin graduated from Terry High School in Terry, Mississippi in1950, where he was active on the football team and was a Golden Gloves boxer. This is also where he met his lovely bride, Sara Carolyn Booth Patrick during his Freshman year in High School. They married in 1951 and enjoyed 70 years of wedded bliss. Calvin was always involved in missions, both at home and abroad, working with a variety of churches and organizations to build churches and homes, as well as assist with humanitarian or medical work. As a long time member of Green Valley Baptist Church, in Hoover, AL, Calvin was instrumental in starting a United Way Food Bank in the late ‘80s that is still in service today. His focus has always been on helping his fellow man in any way possible. Calvin was almost always one of the first on the scene in times of crisis. Ready to help in any way he could. Most recently, Calvin was a member of Lakeside Baptist in Birmingham, AL and was very involved with his Sunday school class. Calvin worked for AT&T (Jackson, Mississippi) and Communications Workers of America (CWA) (Johnson City, TN/Birmingham, AL) for more than 40 years. His last position with CWA was in Birmingham, AL as Administrative Assistant to the Vice President of District 3, and he was responsible for all activity in, what was then, the South Central Bell area. Calvin even wrote a book about some of his experiences working with CWA titled, “Inside the Hurricane”. After retiring from CWA, Calvin went on to work and volunteer with the American Red Cross helping with disaster relief. Calvin loved all of his family with his whole heart. He was passionate about “being there” and for keeping everyone in touch with each other. He would organize family reunions and travel to visit with family as often as possible, and until he was no longer physically able, he was at the side of ailing family, or alongside as eternal farewells were made. This passion resonated in his desire to fully know the history of the Patrick family and all its branches. Calvin spent untold hours researching and gathering information on his family’s genealogy, and has written several books which chronicle this history. He could truly sit and talk for hours on this subject. As the oldest of five children, Calvin always took responsibility of helping his siblings whenever he could. As example, in their early twenties, he and Carolyn stepped in to help raise his sisters Nadyne and Martha, who were teenagers at the time, when family needs arose. Once they were successfully on their own, he and Carolyn adopted their first child, John Calvin. Four years later they adopted their daughter, Joyce Carol. John and Joyce were truly blessed to have Calvin as a father. He was their biggest supporter and taught them to always do all they could for their fellow man. Calvin is survived by his bride of 70 years, Sara Carolyn Booth Patrick, his daughter, Joyce Carol Patrick Preston (Keith), his grandson, Michael Douglas Preston, his sister, Nadyne Patrick McGehee and countless nieces, nephews and cousins. Calvin lived his life as his testimony. He said on many occasions that no one would listen to your words if you didn’t first speak with your life. He always told his children: The only failure is to not try. Always give what you can…even if all you can give is a smile. Be kind and leave everyone you encounter better than you found them. And lastly, he would want us to remember Matthew 25:40 “And the King will answer them, “Truly, I say to you, as you did it to one of the least of these my brothers, you did it to me.” The family will receive friends and family on Friday, March 26th from 10-11:00 a.m. with a service to follow at 11:00 a.m. at Southern Heritage Funeral Home—475 Cahaba Valley Road, Pelham, AL 35124. A graveside service will be held in Terry, Mississippi at 12:00 noon on Saturday, March 27th, and family will receive family and friends prior to this service from 10:30 -11:30 at Chancellor Funeral Home - 7225 S Siwell Road, Byram, MS 39272. In lieu of flowers, the family requests that donations be made to a mission-oriented ministry of your choice.
To order memorial trees or send flowers to the family in memory of Mr. Calvin Isaac Patrick Jr., please visit our flower store.