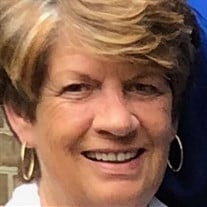 Brenda Kelly Singletary passed into the arms of Jesus on Wednesday, March 23, 2022 in South Carolina. The family will receive friends for visitation on Monday, March 28th from 6:00 - 8:00 p.m. at Chancellor Funeral Home in Florence. The Funeral Service will be held on Tuesday, March 29th at 10:00 a.m. with visitation one-hour prior to the service all at the funeral home. She will be laid to rest at Palestine Cemetery. Those serving as pallbearers are Jason Singletary, Dustin Singletary, Layne Singletary, Tyler Singletary, Kenny Kelly Jr., and Dan Zukowski. Solomon Singletary will serve an honorary pallbearer. Brenda is the daughter of Robert Kelly and Pauline Buckley Beal. She was born October 11, 1949, in Harrisville, MS. Along with her parents, she is also preceded in death by her brothers, Kenny and Bobby. She is survived by her husband, Lamar Singletary; sister, Linda Zukowski; sons, Lamar Jr. and wife Rachel, Jason and wife Karen, and Dustin; and five grandsons she adored, Dylan, Brendan, Layne, Tyler and Solomon. Family was very important to Brenda, she is also survived by many beloved cousins, nieces and nephews. Flowers can be sent to Chancellor Funeral Home at 2576 US 49, Florence MS 39073. If you would like to make a donation in lieu of flowers, please contact American Heart Association in honor or in memory of Brenda Kelly Singletary.
To order memorial trees or send flowers to the family in memory of Mrs. Brenda Kelly Singletary, please visit our flower store.