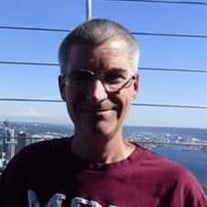 On Friday, August 29, 2019, Bradley Lavern Boone “Brad”, loving husband and father to Anna Boone and their four children passed away at the age of 48. Brad was born on August 3rd, 1971 in Jackson, Ms to Floyd and Norine Boone. He obtained his Associates Degree from Hinds Community College and his Bachelor's Degree in Business Management from Mississippi State University in Starkville, Ms in 1994. On October 15, 2005, Brad married Anna Francis in Columbia, TN. Together, they raised their children that Anna had prior to Brad. In the following years, Brad adopted Anna’s children Caleb, Katelyn, Sarah, and Christian Boone. Brad was known for many things in his life but, most of all, he was known as a gentleman. Brad served God faithfully his whole life acting the roles of a Sunday School teacher, Usher, and as a faithful member of the church. He loved hunting, fishing, and the outdoors with some of his fondest memories being with his family; particularly his daddy. Brad loved reading his books and would spend most of his day drinking coffee and reading a western in his chair. He was known for his stories, infectious smiles, and his patient and passionate heart and spirit. Brad was preceded in death by his father, Floyd Boone. He is survived by his mother Norine Sawyer and his Step-Father Gerald Sawyer, his wife Anna Boone, his four children Caleb, Katelyn, Sarah, and Christian Boone, his two sisters, Kathy Johnson and Cori Denning, his two brothers, Jimmy and Micky Boone along with several cousins and many nieces and nephews. The funeral will be on Tuesday, September 3rd, 2019 at First Pentecostal Church of Jackson of which he and his family were long time members. The service will be at 11am with the viewings being on Monday night from 5pm-7pm at Chancellor Funeral Home in Byram, Ms and 10am Tuesday morning at First Pentecostal Church of Jackson. Interment will follow at Garden of Memories in Florence, MS. Flowers may be sent to Chancellor Funeral Home at 7225 South Siwell Rd #9776, Byram, MS, 39272.
To order memorial trees or send flowers to the family in memory of Mr. Bradley "Brad" L. Boone, please visit our flower store.