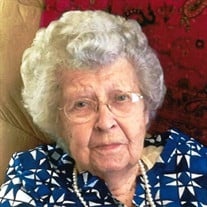 Bonita McGee Martin, 89, passed away on April 21, 2020 at Pine Crest Guest Home in Hazlehurst, MS. Due to the current circumstances, the family will have a graveside service at Lakewood Memorial Park South on Saturday, April 25 at 11:00 a.m. Born to Willie McGee and Fola Strait McGee in Lincoln County, MS on September 01, 1930, Bonita spent most of her life in Jackson. She was a graduate of Loyd Star High School in Brookhaven where she was known for her achievements in basketball. Throughout her life, Mrs. Martin had been employed as a secretary with the United States Social Security Administration and worked part-time at the Oak Forest School Cafeteria, but most of all, she was a devoted mother and housewife. She attended Forest Hill United Methodist Church where she was a member of the Crusaders Sunday school class. In her spare time, Bonita enjoyed sewing, crafting, gardening, and canning. Along with her parents, she is preceded in death by her loving husband, Paul E. Martin; son-in-law, Eddie Dear; and step-son, Gary H. Martin. She is survived by her step-son, Gene Martin of Meridian; daughters, Lynn Martin of Sherwood, AR, Sandra Dear of Wesson, and Mary (Nick) Posey of Tuscaloosa, AL; sister, Billie Ellison of Pearl; brothers-in-law, Rev. Glenn (Pat) Martin and Rev. Joe Blackwell; two grandchildren, Marshall (Christy) Dear and Kimber (Thomas) Callen; and two great-grandchildren, Copeland and Eleanor Callen; along with numerous nieces and nephews. Online guestbook may be signed at chancellorfuneralhome.com.
To order memorial trees or send flowers to the family in memory of Mrs. Bonita McGee Martin, please visit our flower store.