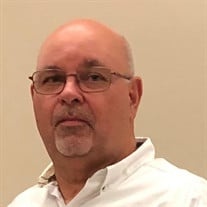 Bobby Lamar Sanders passed into the arms of Jesus on Monday, January 24, 2022 at MS Baptist Medical Center in Jackson. He was 65 years old. The family will receive friends for visitation on Thursday, January 27th from 5:00 – 8:00 p.m. at Chancellor Funeral Home in Florence. The Funeral Service will be Friday, January 28th at 11:00 a.m. at Calvary Baptist Church in Braxton with visitation one-hour prior at the church. Burial will follow at Braxton Cemetery. Lamar was born August 29, 1956 in Greenville, MS to S.G. and Dot Sanders. He was a member of Calvary Baptist Church in Braxton. Lamar loved his family, especially his grandsons. He enjoyed classic cars, classic rock, and camping with his family. He was an avid coin collector that also enjoyed going to flea markets. Lamar was preceded in death by his father, S.G. Sanders; and his sister-in-law, Shelia (Roger) Sanders. He is survived by his wife of 40 years, Lee Sanders of Byram; sons, Terry (Casey) Sanders of Byram and Brandon (Jessica) Sanders of Richland; grandchildren, Colt Sanders, Jessie Vardaman, and Jonathan Vardaman; mother, Dot Sanders of Florence; sister, Sandra (John) Bates of Pearl; brothers, Roger (Patsy) Sanders of Pearl, Allen (Denise) Sanders of Florence, and Gary (Barbara) Sanders of Florence; and numerous nieces and nephews.
To order memorial trees or send flowers to the family in memory of Mr. Bobby "Lamar" Sanders, please visit our flower store.