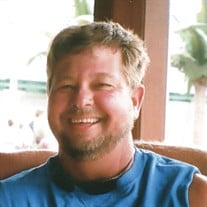 Bobby Joe Bridges passed away on March 23, 2020 at his home in Byram surrounded by his loving family. He was 58. Due to the current circumstances, the family will have a graveside service at 1:00 p.m. Friday, March 27, 2020 at Harmony Baptist Church Cemetery in Crystal Springs, MS. Mr. Bridges was born to Marlene Duncan and Odell Bridges on June 29, 1961 in Compton, CA. Bobby was a long-time resident of South Jackson where he was employed with Triple A Cooper for 28 years. He was an active coach to his son as he played baseball growing up and loved classic cars. Along with his parents, he is preceded in death by his son, B.J. Bridges and brother, Billy Bridges. He is survived by his loving wife, Cheri Bridges of Byram; son, Kyle Bridges of Little Elm, TX; brother, Tommy Bridges of Crystal Springs; sister, Starla Lambert of Monticello; and two grand-children, Kaydin Skylar Bridges and Brylin Jasia Bridges. Bobby Joe Bridges was a man of many titles. Husband. Father. Brother. Coach. Friend. Mechanic. Car enthusiast. Worker. Sports fanatic. And most importantly, Bobby was a fighter. Bobby met the love of his life, Cheri Lynn Brown, at the young age of 15 years old. From the moment Cheri jumped through his car window at the age of 14, the two became inseparable. If you asked Bobby the secret to his 40 years of marriage, he would reply, “It’s simple. She’s my best friend.” Together they had two sons, Bobby Jason and Kyle Brandon. He took pride in being a father and you could find him coaching from the dugouts, hunting or fishing on the weekends, or simply teaching them everything they needed to know about life and cars. It didn’t matter if he just worked a 12 hour night shift, he never missed a ballgame or event with his sons. Bobby was a family man. He had many friends and considered them family as well. If you couldn’t find your son, chances were they were at the Bridges house as he treated and loved every child like his own. If you needed a shirt, he would be there holding out the very one from his back. His love for people was selfless. He wasn’t complicated. In fact, it didn’t take much to make him happy, simply a weekend in the garage surrounded by the people that he loved. Bobby was a stubborn man. He found joy in calling you out when he “knew” you were wrong. He wasn’t scared to rip you a new one if you dared to park on his beloved grass. And if you needed advice or a friend to watch Nascar and eat boiled peanuts with, he was your guy. Most of all, Bobby was a fighter. A few years after the loss of their son BJ, Bobby was diagnosed with Stage 4 colon cancer. His battle lasted two long years and he took his final breath holding hands with the people he loved most. Even through sickness, Bobby put everyone first. He worked hard and made sure his family and friends would be looked after and cared for before he made his grand exit to reunite with his son and the lord above. He challenged cancer and made sure it knew he wasn’t leaving without a fight. He never lost sight to who he was. In fact, the only thing he asked was that he be buried in his favorite pair of blue jeans, his “cruising the coast” t-shirt and socks so his feet don’t get cold. Above all, Bobby made sure everyone knew how much he loved and appreciated them. Bobby left this world with grace, courage and dignity. He showed us that life is not to be taken for granted. Although we will miss the memories and legacy he left behind, we can be at peace that he is no longer in pain and finally reunited with his son in the heavens above. We love and will miss you. Rest easy, Bobcat.
To order memorial trees or send flowers to the family in memory of Mr. Bobby Joe Bridges, please visit our flower store.