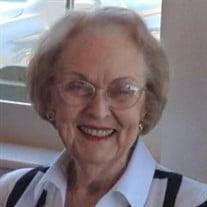 Bobbie Roberts, our sweet, precious, loving Wife, Momma, Grandmomma, Great-grandmomma, Sister-in-Law, Aunt, and dear friend, passed gently into her eternal home with Jesus Christ her Savior on May 18, 2022. Visitation will be Monday, May 23, from 10-12 at Chancellor Funeral Home on Siwell Rd. in Byram with the funeral service following at noon. Bobbie was born in Ethel, MS, to Luther and Ollie Johnston Latham. She had an older sister Clara (Flanagan) and brother L. C., who preceded her in death. She attended school in Ethel where she was elected president of her freshman, sophomore and junior classes. She graduated prior to her senior year to attend MSCW. A series of surgeries interrupted her education, but she returned to school and graduated from Northwest Junior College where she was selected as a “Campus Beauty”. After graduation she moved to Jackson. She met her husband, R. C. “Sonny” Roberts in Canton at Plantation Junior, owned by Sonny’s first cousin, Ernest Applewhite. Sonny told Ernest that he had just seen the prettiest girl in his life and that he was going to ask her to dance. They loved dancing together for many years afterwards. Bobbie worked with Sonny for a number of years in their business, Southern Seed Company. She later worked for Hillcrest Baptist Church as the Financial Secretary where she made numerous lasting friendships. Sonny and Bobbie enjoyed many years of traveling together to places such as Scotland, England, France, Japan, Mexico, Hawaii and numerous resorts throughout the states. Bobbie was an outstanding cook. Whatever she cooked was likely to be the best you had ever tasted. She read cookbooks like most people read novels, and mentally altered the recipes as she read. Her recipes and techniques are highly treasured by her family and friends. She was still cooking for large family gatherings into her 90s. Her special delight was cooking with her children and grandchildren who have many great memories of those times together. One did not enter Bobbie’s house without being offered something to eat and you almost certainly left with food to take home. Bobbie loved having friends over for spirited games of Canasta. She was a cut-up and great fun, but a tough competitor who hated to lose, even to her grandchildren. But without question, what Bobbie enjoyed most was being with her family and friends. Her capacity for love and friendship knew no bounds - it was her gift from God, and we were the beneficiaries. She was genuinely interested in everyone she encountered and made them her friends almost immediately. She had an uncanny ability to make everyone feel special - because to her you were. She just loved people and they knew it. She never stopped making new friends and being a friend, even in her last days. It was just who she was. Bobbie was never afraid to try something new. In conversation, she frequently repeated “I learned something new today.” She discovered Facebook in her late 80s and got her first iPhone at 90. She loved Facebook because it gave her the chance to keep up with her friends and family, and their friends and families. Imagine her shock when she found out that “LOL” (which she sent as a response to a host of postings) did not mean “Lots of Love”! Bobbie was a long-time member of Alta Woods Presbyterian Church, then Pearl Presbyterian Church, and a faithful member of Wynndale Presbyterian Church until she and Sonny moved to the Waterford where she attended the Stillwater Church on the premises. Bobbie is survived by Sonny, her husband of 72 years, her son Richard C. Roberts III and wife, Ginny, daughter Cynthia Roberts and husband, Mike Hutchings, Beverly Trussell and husband, Pete, grandchildren, Jennifer Williams and husband, Joey, Todd Trussell, Charlton Roberts and fiancé, Ceara Teixeira, JulieAnna Sherrod and husband, John, Natalie Hargrove and husband, Will, sister-in-law, Anne Roberts Hartness, ten great grandchildren, one great great granddaughter, three nephews and one niece. She was preceded in death by her first grandchild, Joshua Charlton Roberts.
To order memorial trees or send flowers to the family in memory of Mrs. Bobbie Latham Roberts, please visit our flower store.