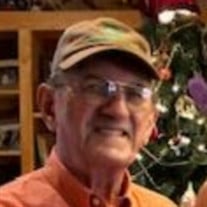 On Monday, August 3, 2020, Bob Michael Sansing, loving husband and father, passed away at the age of 74 at his home. The family will receive friends on Thursday, August 6th from 5-7 p.m. at Chancellor Funeral Home in Florence. There will be a Graveside Service on Friday, August 7th at 10:30 a.m. at Antioch Baptist Church Cemetery in Florence. Due to the current guidelines regarding gatherings, there will only be 10 people allowed in the chapel at a time during visitation and 20 people at the graveside and mask or facial coverings must be brought and worn. Bob was born on December 8, 1945 to the late John Aubrey and Charlie Oleta Sansing of Fulton, MS. He married Linda Walters of Jackson, MS on November 28, 1968. They raised a son, John and a daughter, Jennifer. Together, they owned the Sewing Center of Jackson, MS for nearly 30 years. Bob thoroughly enjoyed his career repairing sewing machines and loved being a hobbyist Bee-Keeper. Some of his other interests were gardening and his 1958 GMC truck. Bob served our country in the U.S. Army and he was a member of Antioch Baptist Church in Florence, MS. Along with his parents, Bob is also preceded in death by his brother, John and sister, Pat. He is survived by his wife of 51 years, Linda Sansing of Florence; his son, John (Brenda) Sansing; daughter, Jennifer (Matt) Huff; grandchildren, Emily and Landon; step-grandchildren, Kisha and Cory; step-great grandchildren, Cheyenne, Kayla and Brantley; sister, Mevalyn (David) Walters; and numerous nieces and nephews and extended family members. Online guestbook may be signed at www.chancellorfuneralhome.com.
To order memorial trees or send flowers to the family in memory of Mr. Bob Michael Sansing, please visit our flower store.