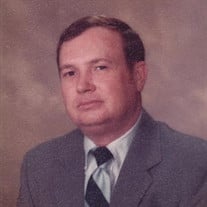 Benjamin Wesley Little, 77, passed away on Saturday, April 16, 2022 at his home in Byram, MS. Visitation will be held at Chancellor Funeral Home in Byram on Tuesday, April 19, 2022 from 11:00 a.m. until the hour of the service at 1:00 p.m. Interment will follow at Lakewood Memorial Park. Pallbearers will be Spencer and Warren Taylor, Ronnie Heard, Ryan Cox, Mike Wroten, Charlie Little, James Birdwell, and Dustin McCain. A long-time resident of Byram, Ben was born in Jackson, MS on November 11, 1944 to Charles and Geneva Little. Ben was employed as a deputy with the Hinds County Coroners Office for a number of years. He was also the owner and operator of two businesses throughout his career—Professional Ambulance Service and his HVAC company, Little’s Service Company. He was a member of Central Baptist Church in Byram, MS. Along with his parents, he was preceded in death by his wife, Sandra Kay Little; son, Todd Little; sister, Charlene Wroten; and brother, James Little. He is survived by his daughter, Christy Higdon of Madison; grandchildren, Spencer, Warren, and Lindsey Taylor; great-grandchildren, Harper Nicholson and Ainsley Wilson; brother, Bob Little of Byram; sister, Shirley Rogers of Jackson; and a number of nieces and nephews.
To order memorial trees or send flowers to the family in memory of Mr. Ben Wesley Little, please visit our flower store.