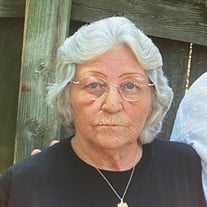 Ms. Anna R. Goode, 82, passed away Tuesday, January 12, 2021 at St. Dominic’s Hospital in Jackson. Her family will receive friends for visitation on Friday, January 15th from 10:00 a.m. until 12:00 p.m. at Chancellor Funeral Home in Florence. There will be a Graveside Service following at 12:00 p.m. in the Garden of Memories. Ms. Goode was born June 2, 1938 to the late Franz and Anna Rissel in Ludwigshafen, Germany. She moved from Germany in 1960 and she worked as a rubber stamp maker with Dixie Rubber Stamps. Mrs. Goode loved her family dearly and took pride in being their caregiver and cooking for them. She enjoyed cook-outs and sharing meals. She was a good gamer and enjoyed playing games, especially Bingo. She loved whatever her grandchildren were into, whether it be baseball, football, or any other activity they were involved in. Along with her parents, she is also preceded in death by her son, Harry Rissel. She is survived by her sons, Charles Goode of Meridian and Terry (Annette) Goode of Florence; daughters, Sundra (Paul) Parker of Florence and Shannon Goode of Florence; grandchildren, Tiffany (Octavio Medina) Parker, Paul Jason Parker, Terry (Cody) Goode, Jr., Amanda Goode and Hunter Parker; and great grandchildren, Alexis Parker, Landon Parker, Abigayle Medina, Amberly Medina, Brianna Goode, Maci Goode, and Doug Goode.
To order memorial trees or send flowers to the family in memory of Ms. Anna R. Goode, please visit our flower store.