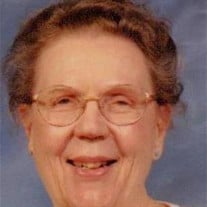 Zenia Davis Spencer was born on February 24, 1926, in Jacksonville, Florida. She earned a bachelor’s degree from Stetson University in DeLand, Florida, and a master’s degree in Psychology from Florida State University. While at the university, she met George Minard Spencer, a Ph.D. candidate from Sanford, Florida. They became engaged and were married on August 9, 1953. While living in Tallahassee, they welcomed two children, Lawrence and Susan. The family moved to Endwell, New York, where George worked for IBM and a third child, Patricia, was born. When George was transferred to Huntsville, Alabama, Zenia worked at Randolph School, where her children were enrolled. The Spencers then moved to Boca Raton, Florida, where she worked for the Broward County Court System. George and Zenia retired to the mountains of western North Carolina, where they remained until they moved to Mississippi to be closer to family. Mrs. Spencer passed peacefully at St. Catherine's Village on January 26th, 2019. She is preceded in death by her parents, her husband, Dr. George Spencer; her brother, Rev. Lynn Spencer, her sister Mrs. Caroline Davis Cohen, and her brother-in-law, Dr. Jack Spencer. She is survived by her three children, Lawrence Spencer (Debra) of Cedar Park, Texas, Susan Spencer Ringer (David) of Florence, Mississippi, and Patricia Spencer Weatherford (Todd) of Jacksonville, Florida; seven grandchildren, and three great-grandchildren. Memorials may be made to the Dr. Jack Spencer Scholarship Fund at Florida Southern College or her church, Marvin United Methodist Church in Florence, Mississippi.

Zenia Davis Spencer was born on February 24, 1926, in Jacksonville, Florida. She earned a bachelor&#8217;s degree from Stetson University in DeLand, Florida, and a master&#8217;s degree in Psychology from Florida State University. While at the... View Obituary & Service Information

The family of Mrs. Zenia Davis Spencer created this Life Tributes page to make it easy to share your memories.