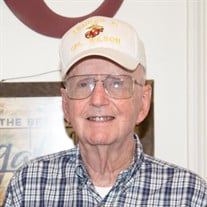 Mr. Willie Ray Wilson, 88, passed away on Saturday, March 7, 2020. His family will receive friends at a visitation on Monday, March 9, 2020 from 9:00 AM until 11:00 AM at Chancellor Funeral Home in Florence, MS. A funeral service will be at 11:00 AM on Monday, March 9, 2020 also at Chancellor Funeral Home. Burial will follow at Florence Cemetery in Florence, MS. Mr. “Buck” Wilson enlisted in the United States Marine Corp in March 1949 where he served proudly until March 1952. On December 23, 1952, Buck married the love of his life, Ms. Opal Hammack, and they remained married to each other for the next 67 years until his death. Buck, who was a natural leader, was widely known as an enormously generous and honorable man of integrity. His joyful optimism was contagious. He retired from Armstrong World Industries in Jackson, MS after 42 years of service. His hobbies included water skiing in his early years, spending time with his family, working on mechanical projects, and woodworking after retirement. Mr. Wilson was preceded in death by his parents, Idale Levon Wilson and Tinye Tucker Wilson; three sisters, Alice Arrington, Leslie Dayne Smiddy, and Edith Mae Creel; and one brother, Glen Levon Wilson. Those left behind to cherish his memories include his wife of 67 years, Opal Wilson of Florence; his son, Steven Ray (Stephanie) Wilson of Brandon; his daughter, Cynthia Diane (Darren) Crotchett of Brandon; four grandchildren, Jason Wilson (Sarah) Ainsworth, Thomas Bradley (Christen) Ainsworth, Chandler Justin Crotchett, and William Mason Wilson; and three great grandchildren, Jack, Walker, and Grayson Ainsworth. The family would like to share their ‘Special Thanks’ to the staff at Merit Health Rankin, Brandon Court and Pax Hospice for your loving care for dad.

Mr. Willie Ray Wilson, 88, passed away on Saturday, March 7, 2020. His family will receive friends at a visitation on Monday, March 9, 2020 from 9:00 AM until 11:00 AM at Chancellor Funeral Home in Florence, MS. A funeral service will be at... View Obituary & Service Information

The family of Mr. Willie "Buck" Wilson created this Life Tributes page to make it easy to share your memories.