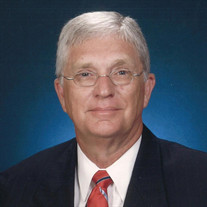 William George (Bill) Tolleson died Saturday, December 12, 2020 two days before his 80th birthday from Covid-19 complications. The celebration of Bill's life will be held at 1 p.m. Tuesday, December 15, 2020 at First Baptist Church Florence. The family requests anyone choosing to attend please adhere to Covid-19 guidelines, including face coverings and social distancing. Bill was born December 14, 1940 in Kosciusko, MS, the fifth of the six children of Lemmie and Zenia Tolleson. He grew up on the family farm picking peas, feeding cows, and shooting squirrels. Farm life was a life Bill initially sought to escape, but to which he would eventually return. He bought most of the family farm and had coffee with the same view and fished from the same pond that his mother and father had. By the late fifties, while searching for a route off the farm, Bill found a job at Nowell Funeral Home in town. He spent his senior year sleeping upstairs, getting up at all hours of the night, serving as an assistant undertaker. His family is very thankful he did not choose that profession. The cheapest way out of Attala County back then was a bus ticket paid for by the U.S. Army. They bussed him off for a summer in Utah and a long winter in Alaska. The Army discovered that, while he could shoot a rifle, Bill had much more of a killer instinct with a typewriter. When he was not running from polar bears to keep warm, he became the company clerk. Bill returned to the warmer, more hospitable climate of Mississippi where he got a job at Standard Oil in Jackson. There, in the elevator, he saw a small, dark-haired switchboard operator. With the experience gleaned from selling GRIT newspapers as a kid, he began selling himself to the operator. A courtship commenced and on the day of one of the largest snowstorms in the State’s history, December 21, 1963, Bill married Patsy Sebren of Jackson. In 1966 Bill went to work for Firestone Tire and Rubber Company on Pascagoula Street where he sold tires, lawnmowers, air conditioners, brake jobs, and bicycles. After a tour of duty running stores in Columbus, MS, he returned to Pascagoula Street as the manager, where he reigned until 1994. He then launched a successful truck tire center in Richland, from where he eventually retired in 2007 after 41 years with Bridgestone Firestone. Bill enjoyed helping others in their respective career paths, and many went on to be wildly successful by using his direction and knowledge. Though his career and experience were in retail, the lessons he taught and experience he shared transcended the sales floor and prepared folks for careers in diverse industries. Bill was a member of First Baptist Florence where he served as Chairman of the Deacons, Budget and Finance, Personnel and Nominating Committees. He loved his Men’s Sunday School Class. He was a proud man. Proud of his wife of 57 years minus 9 days, proud of his children, Chris Tolleson and Ginny Tolleson Taylor, and proud of his five beautiful granddaughters Michaela Tolleson, Piper Marie Tolleson, Maci Taylor, Kara Rose Taylor, and Ivey Taylor. Though he lived a life full of boast-worthy accomplishments and connections, the only thing Bill enjoyed bragging about was his crop of muscadines, the size of the bream in his pond, the deer on his game cameras, and the John Deere tractor he bought. He loved and was loved. He died a content man having lived a full life. The family would like to thank all his caregivers over the last few weeks of his illness. The family requests all memorials go to the Mississippi Animal Rescue League, 5221 Greenway Drive Ext., Jackson, MS 39204. Bill was welcomed in heaven by his father Lemmie Tolleson, mother Zenia Henderson Tolleson, and sister Mattie Tolleson Owens. He is survived by his wife Patsy Sebren Tolleson of Florence, son Chris (Debbie) Tolleson of Florence, and daughter Ginny Tolleson (Jarred) Taylor of Star; five granddaughters: Michaela and Piper Marie Tolleson, Maci, Kara Rose, and Ivey Taylor; two brothers, James Tolleson of Little Rock, AR, and Lavon Tolleson of Madison, MS; two sisters: Lois Pinkard of Kosciusko, MS, and Clara Bray of Foley, AL; and a host of other relatives and friends. Online guestbook may be signed at www.chancellorfuneralhome.com.

The family of Mr. William Tolleson created this Life Tributes page to make it easy to share your memories.