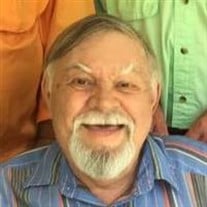 William Thomas “Tom” McKay, 76, passed away Thursday, December 6, 2018 at his home in Bolton, MS surround by his family. Visitation will be Sunday, December 9th from 1:00 p.m. until the 2:00 p.m. Funeral Service at Chancellor Funeral Home in Florence. Burial will follow in the Garden of Memories. Tom was born on March 1, 1942 in Camden, MS to the late Ruth and Otis McKay. He was a proud Veteran of the U.S. Navy. He retired from North Brothers Company as their warehouse manager after many years and was a Bi-vocational Minister at several churches. He enjoyed riding Harleys and loved spending time with his family and friends. Along with his parents, Mr. McKay is preceded in death by his first wife and mother of his children, Mrs. Odene McKay. He is survived by his wife of 10 years, Faye Cooper McKay of Bolton, MS; his sons, Lee McKay of Edwards, MS, Allen McKay of Jackson, MS, and Kevin McKay of Bailey, MS; his daughters, Debbie Braswell of Raymond, MS and Darlene Townsend of Raymond, MS; sister, Janell Gober of Effie, LA; 10 grandchildren and 10 great grandchildren. The family wishes to say a special thank you to his hospice nurse and friend, Caroline Milne, for going above and beyond with her care for Mr. McKay in his final days. Furthermore, the family wishes that in lieu of flowers, memorials may be made to Kindred Hospice in Flowood in his memory.

The family of Rev. William Thomas "Tom" McKay created this Life Tributes page to make it easy to share your memories.