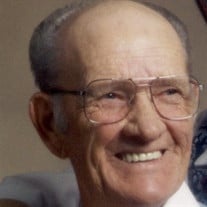 William Earl Hodge, 93, of Terry, drew his last breath on Saturday, May 19, 2018 at G.V. Sonny Montgomery VA Hospital in Jackson. Visitation will be 5-8pm Monday May 21, 2018 at First Pentecostal Church and 10am Tuesday until the funeral service at 11am, May 22, 2018 at First Pentecostal Church in Jackson. Interment will follow at Garden of Memories in Florence. Mr. Hodge was born March 3, 1925 to William and Ethel Thompson Hodge and resided in Terry for the past 40 years. Earl served in the United States Army and was a WWII POW. He was an incredible man, husband, daddy and Pawpaw. He will be deeply missed and dearly remembered by his family and friends. He was a faithful member of First Pentecostal Church since 1964. He is preceded in death by his parents, and sons, James Earl Hodge and Barney Earl Hodge; sisters, Ardell Jordan and Bertha Horne. He is survived by his wife, of 69 years, Peggy Nell Hodge; son, Pete (Wanda) Hodge of Terry; daughters, Peggy Jean (Rodger) Maly of Pelahatchie and Helen (Earl) McCrory of Terry; brothers, Harles Hodge of Jackson and James Ernest ‘Sonny Boy” Hodge of Brandon; sister, Peggy Sullivan of Pearl; 9 grandchildren and 13 great grandchildren.
To order memorial trees or send flowers to the family in memory of William Earl Hodge, please visit our flower store.